Julia Child (Meryl Streep) not apologizing for messing up the omelet.
‘I know how to bake an egg!’, says Julia Child indignant in the film Julie&Julia, when she’s looking for an advanced cooking class in Paris. But a few scenes later we see her flipping an omelet on her TV-show ‘The French Chef’, landing it half in the pan and half on the stove. ‘Never apologize, no excuses, what happens in the kitchen, stays in the kitchen’. Besides; ‘who’s to know?’, Julia says in her Julia-style.

Although an omelet seems to be the simplest thing to cook, film and reality prove that baking a golden, fluffy omelet is one of the more daring skills in cooking and it is therefore often set in a competition of skills-testing context. Here are the eight steps on baking an omelet, accompanied by iconic film scenes.

1 break the eggs with one hand

No one does this at home, breaking an egg with one hand. Too risky, too messy if you fail, and a waste of eggs altogether. This is only for show offs. But in film, of course, show offs count, so you have to break eggs using only one hand. It generally symbolizes your professionalism and experience.

Spoon in the herbs, don't be modest (The hundred foot journey)

2 spoon in the herbs

Add herbs and spices to taste. But in film, and especially if you make the Indian spiced omelet of The Hundred Foot Journey,  don't be shy and spoon in a lot of herbes, like salt and pepper, coriander, chilis and garam masala.

Also: no-one uses oil to grease the pan, only use (lots of) butter in an average heated pan. Swirl the piece of butter around to evenly grease the pan.

Julia Child gets her training at the prestigious Le Cordon Bleu in Paris and we see her with her fellow students making omelets simultaneously. They bake the omelet by moving the pan frantically horizontal over the stove, making sure the egg does not stick to the pan too long. You can also gently stir the egg with a fork. That’s done in the film Burnt. In Asian films as Tampopo and Final Recipe the cook uses chopsticks. Stop stirring after 30 seconds or else you get a scrambled egg.

Tap the pan handle with your fist (Tampopo)

After the eggs solidify a bit on the bottom, try to move the mass by holding the pan in 30 degrees. Tap the pan handle with your fist - always the fist - so that the whole egg mass slides to the edge. While ticking the pan you can fold the omelet in two and in a moon shape. The shoving (3) and tapping (4) form the essence of the cinematic choreography of the omelet. 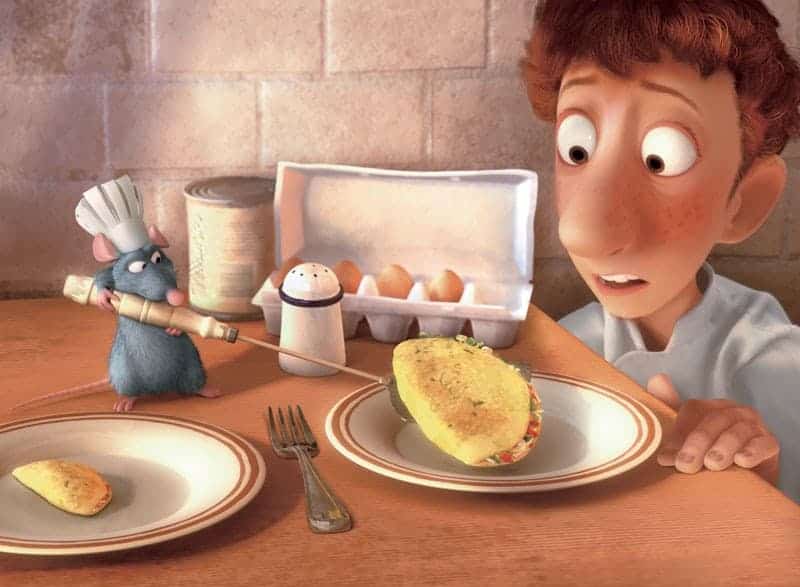 5 slide it on a plate

Sliding the omelet on a plate is always done very delicate, not to break the egg mass. Hold the pan handle as a pen and hold the plate close to the pan. The presentation is always sober and simple. This is done since an omelet is the symbol of the quintessential 'homy' dish, meant to comfort and connect: no fuzz allowed.

The test of the perfect is the slice. When sliced in half, the melted cheese like structure of the inside should show. Like this foodporn scene in Final Recipe. 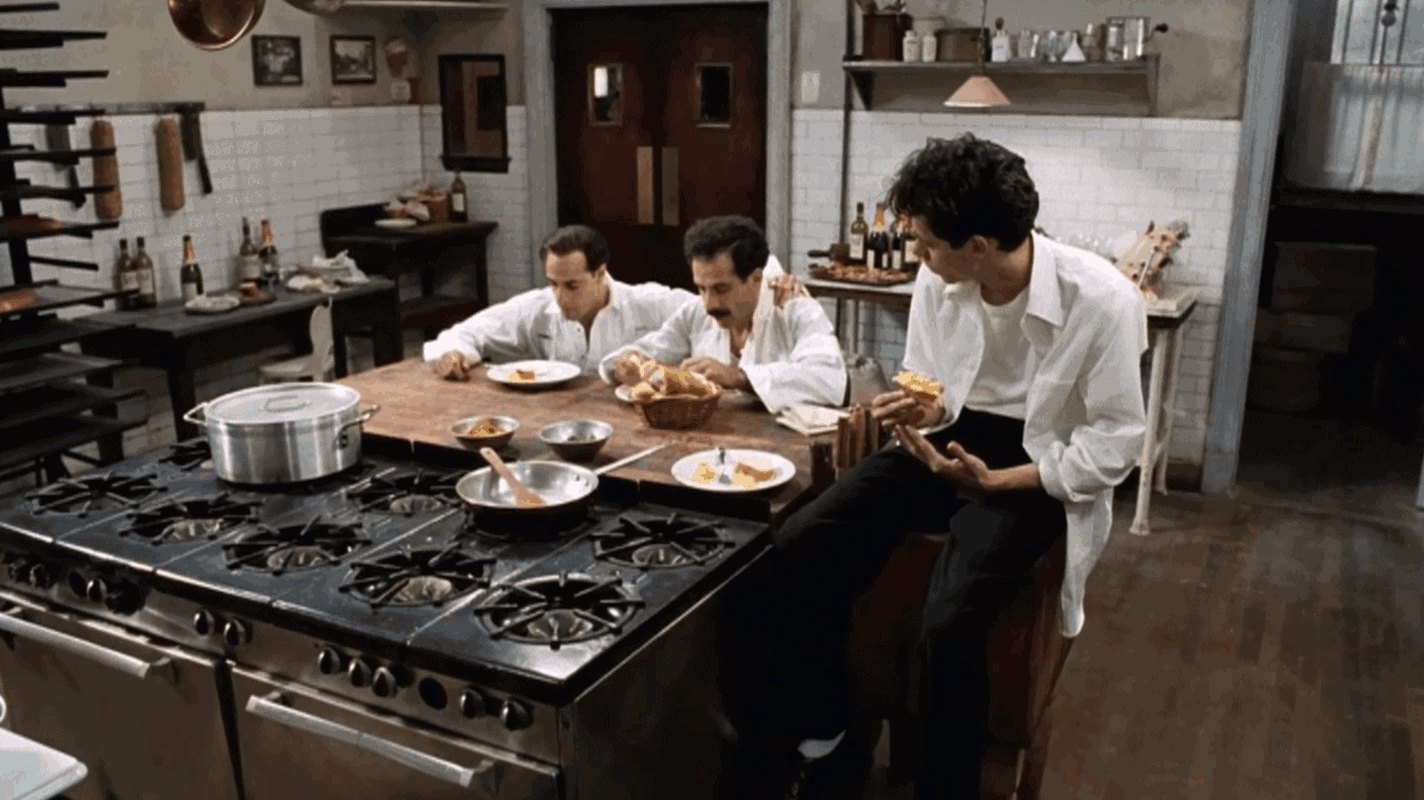 The final scene in Big Night

This is the moment we’ve been waiting for: eating the omelet. This is a sacred moment in film, because it not only proves the skills of the cook, but more importantly, it seals the relationship between two people eating it. These might be two brothers (Big Night), two friends (Ratatouille) or two enemies (Burnt), between master and student (The 100 foot journey, Final Recipe, Julie & Julia) or father and child (Tampopo).

Any cookies that may not be particularly necessary for the website to function and is used specifically to collect user personal data via analytics, ads, other embedded contents.

Any cookies that may not be particularly necessary for the website to function and is used specifically to collect user personal data via analytics.